Well we made it. Fantastic reception into London down the A5. Cars hooting, people of all sorts cheering and applauding in the shopping streets through Burnt Oak, Collindale, Hendon, Cricklewood, Kilburn and down the Edgware Road. 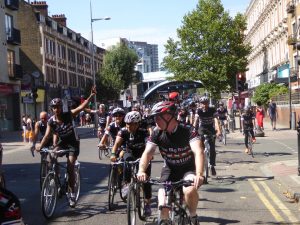 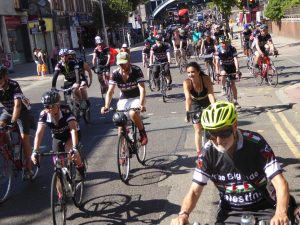 Accommodation ok, although woke at 4:30 to doze on. Got packed and downstairs too late for the advertised pastries – only cellophane wrapped rubber croissants and pain-au-chocolat left, so I took an extra for later. Bikes all retrieved and assembled for briefing and announcements. 193 starters today and more meeting en-route so will be over 200 by London.

In Northampton a couple of people staying in non-cyclist friendly accommodation in city centre had had bikes stolen, but a whip round last night had raised well over £300 which was handed over to them and typical of the mutual support and community amongst the riders.

Policy in case of abuse from passers by is to totally ignore it and not react in any way. In fact there was a miniscule amount, I only heard about two shouted negative comments all 3 days and they were so ignorant as to be funny.

Lovely irony in today’s far right skinhead tendency now using anti-semitism as a term of abuse instead of a badge of honour. I suppose that is a step forward even if they don’t seem to know what it means.

And so we left Luton, heading south down NCR6 all the way to Burnt Oak then going slow (about 10km/hr) so we stayed in a good bunch and occupied the highway as a quarter mile long rolling blockade.

Anyway before that there was a lovely ride, much off road with good surface, down to St. Albans and round Watford. I did a human signpost turn at a junction coming in to Harpenden and again there was a good 15min gap from the stragglers off the tail of the peloton to the back markers thanks to someone with a broken chain.

However I tucked in with two other better than me riders and put our heads down to try and bridge the gap before the late morning rest break. A steady 30 to 40km/hr including the climb out of Harpenden; my turn on the front was pitifully short and they dropped me once but I managed to get back on. We arrived in Veralaum Park only about 5mins behind the main bunch. I enjoyed that as a good work-out ride, and a change from the main group pace.

Before we left the park in St. Albans we lined up and held a one minute silence in memory of the 2500 Palestinian civilians (including over 500 young children) massacred by the Israel Defence Force a couple of years ago and the hundreds killed since. The lads playing and training football on the park heard the announcement and stopped their games to show respect. A massive cheer for them in thanks at the end. People of all sorts connect with this issue.

As we rode down into London the reception on the streets was extraordinary and heart-warming. People applauding, waving, cheering, chanting with us. Car horns blaring, drivers and passengers waving and giving out bottles of water. Cellphones held high streaming pictures and video direct to Palestine.

You can find a short piece summarising what we learnt on the ride here, also available on Cornwall Reports here.

Stats for the day: 59.6km excluding the little bit from Westminster to Euston afterwards (blue on the map below).  Rolling average 13.3 but that was exaggerated by the high speed chase down to St.Albans – the main bunch were going under 12km/hr most of the time and less down the A5 through Hendon & Cricklewood. Max speed 46.4 km/hr (the chase didn’t include any good downhill sections)