Much as yesterday really but with the added attraction (or detraction) of crossing Toulouse. Definitely in The South now. Level with Santandar and Florence more or less.

Moissac is worth a mention first though.

The house was a crumbling three story with more character than a Thomas Pynchon novel. The town itself was really pretty, possibly the best on this trip since Vannes. 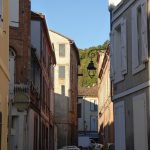 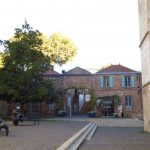 Relatively flat which makes it difficult for a town to have charm, but an arrangement of curving narrow high sided streets, interesting red brick architecture and open irregular squares with a stunning church or two and a covered and open market space plus theatre all added up to a very amenable town. 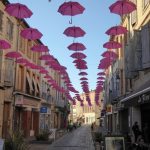 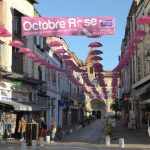 They also had an outbreak of escaped umbrellas. These ones cure cancer in the over 50’s or something.

The church of Saint-Pierre has the most amazing carved romanesque style South door. Whole books have been written about the symbolism of the figures. It is described as the portal to heaven (nb portal, not doorway or porte). 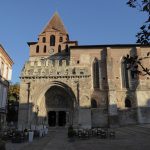 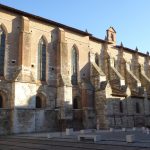 The church itself is 12th century stone in the roman style below (including the portal) with a 15th century brick gothic creation rising on top of it.

The bell tower houses a most musical chime. 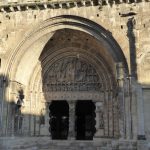 But the canal beckoned. First it had to recross the Tarn. Itself quite a big river. The aqueduct towpath was cobbled with rounded stones that you could only walk, not ride, on or you’d be in the water.

As yesterday there were vast commercial apple orchards from time to time.

If you’ve got to provide permanent hard wired irrigation and also permanent sun screening above for your trees then possibly they are telling you that they don’t want to be grown there.

Yesterday I also saw kiwi fruit orchards being grown the same way. I stopped to pick one but it wasn’t ripe yet.

One engineering point of interest was this boat ramp experiment from 1974 to replace 5 locks. 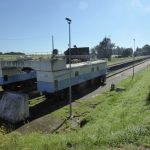 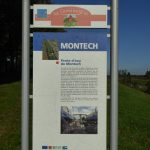 The massive tractor unit holds back a triangle of water on the slope and floats the barges down as it goes slowly down the ramp. It seems to be unused now and the flight of five locks are still working.

As we approached Toulouse the Autoroute and train line converged with the canal and we plunged into the belly of the city. 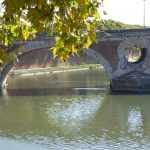 It’s ok, standard big city with a big river. I left the canal and navigated across by dead reckoning so as to see a bit of it. Picked up the Canal du Midi just as it left the centre.

Immediately noticed the almost complete absence of signage compared to Canal de Garonne, and the massively greater traffic (foot and bike) on the towpath.

The first 5 km were lined with moored barges. Not working ones any more, but in various standards of liveaboard. Some very tatty, and many quite large. Possibly the Canal du Midi locks have bigger capacity.

Eventually the canal returned to countryside with occasional locks that seemed to be taller, about 4m, than the Garonne ones measuring about 2m drop.

Still going up though. I guess tomorrow it’ll be over the summit and downhill to the Med.

Best I could do for a nearly there beer was a bar by a noisy main road by a lock. I didn’t hang around. 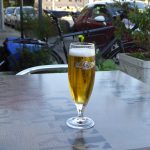 98.6 km today at only 17.1 km/hr despite the very flat ride almost all on smooth tarmac towpath. That’ll be because of looking around in Toulouse. 5hrs 45mins in the saddle and a max speed of 32.2 km/hr.

Tomorrow a short day to look around Carcassonne. Which is as far as Saskia got up to in the summer.