Beauvoisin was interesting. A workers town for the factories of Nimes, the fields around and the big saline extraction facility to the South that uses a drilling rig to extract rocksalt deep under the vineyards by dissolving it in water and sucking up the saline solution to pump 30 miles to the company’s (Kem One – look ’em up, you’ ve probably got some things made of their product) PVC manufacturing plant on the coast.

Anyway I sat in the bar watching the end of the England game – since everyone else was ignoring it I felt it my duty (not). The striking thing was that in this bar smoking was allowed. First time I’ve seen that in France, the law must be different or perhaps they are far enough away from Paris not to care for the letter of it.

Beauvoisin also has a bull running culture – massive cage like barriers along some of the streets. The thing here is not about killing the bull, the contestants attempt to retrieve decorations tied to the bulls’ horns; therein lies the glory. The gore happens out of sight in a slaughterhouse just like at home.

Malika my host was exemplary, pressing hot brioche on me when I arrived, checking that all was ok, and setting out a breakfast feast of bread and fresh dark comb honey and more brioche du sucre. In fact the bread did for my lunch as well.

And so away from a poor but open and friendly town along roads long past needing repair (clearly these are not a people with the political voice to get the communes roads properly fixed).

Down the hill towards Saint-Gilles the road suddenly improved (commune boundary I suspect) and a record breaking downhill run found me in need of coffee, which there was despite many cafes being in Lundi mode (ie closed). Crossed the canal Sete-Rhone for the last time and then 2km out of town the Petit Rhone itself (looked pretty grande by uk standards) and out across the top of the Camargue. 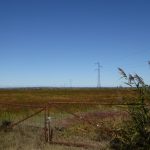 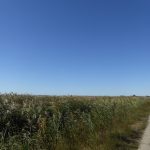 Flat with an air of isolation. No trees. Big areas of what in winter would be wetland marsh, now still in end of summer dried upness. Ditchrows lined with tamarisk now with colour faded and seeds set. Some big fields used for a summer crop of corn now harvested.

They still practice stubble burning here, something I haven’t seen since boyhood in Sussex. Some burning going on a few km upwind cast occasional drifts of smokey haze across the road. Reminded me of stopping the car to go dancing in the burning field with a girlfriend long ago. Remember the event but not the girl, so obviously not The One.

A few white horses around, not running wild but looking contented enough in vast dried up paddocks. Going too well to stop for photos. 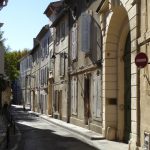 Arles merited a quick look around if only for the van Gogh connection – one of my great visionary heroes along with Blake (William, not Peter obviously). Happy to report that I didn’t see his name once, just a moderately nice river crossing town going about its business. Probably I was in the wrong part of town, but that’s how I wanted it to be. 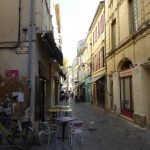 My guess is what attracted VanG was the echoes in the Carmargue of his boyhood in the dykes and flatlands of Holland with its big skies, but with a brighter light (or perhaps just eyes open wide and partially cleansed).

Did see some tall finger like cyprus trees though

After crossing the big Rhone at Arles the plain continued. Here they were growing grass and baling it quite green in small bales.

Cross wind for most of the day, sometimes slightly helpful, sometimes slightly not. After Saint-Martin-de-Crau the road ran alongside the A54 Autoroute for 15km due East. Strangely there was also a D road running parallel just the other side of the motorway but the old road I was on had a good surface still and the motorway had one of those new super smooth quiet surfaces and not too much traffic. Climbing very slowly towards sharp and barren hills that had appeared on the horizon. Still zipping along.

Eventually turned NE and left the motorway, climbing more steadily now and the wind more on the bow so the pace started to drop over the last 20km. 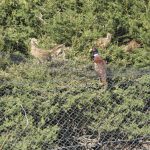 Peach and nectarine orchards. A flock of sheep being ridden by egrets, little ones not cattle ones. Olive groves. A small river (by french standards) in a culvert beside the lane flowing fast fast fast. Also these pheasants being kept under a vast net over the bushes with room to fly around a bit. 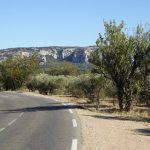 Vertical scenery at last, such a nice change after 10 days of total flatness. Not so much nice when you start to grind up them though. The test of that comes tomorrow.

For now its time for a beer in Mallemort. 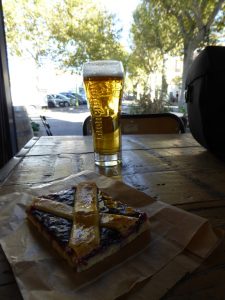 Note also today’s tart. A local speciality apparently though we would know it as a raspberry jam lattice tart. Didn’t really go with the beer though, although each was delicious in its own way..