Well after the highs of yesterday I was due to be taken down a peg or two.

Started badly when I found the charger plug had fallen out of the wall (the wall was sloping inwards so gravity won) and the tablet was totally flat. 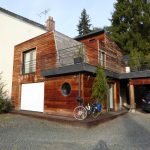 No problem I thought, I’m on the La Loire a Velo route all day so just need to follow signs. Half an hour of charge while I get packed will be enough to find the place at the end of the day.

Left ok, but the next blow was that the boulangerie in the village which I’d spotted last night had decided not to open. No breakfast ?. 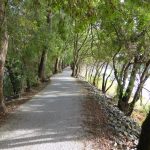 Still the path was good and well signed. More people about than yesterday, cyclists and joggers even though not seen in this photo. To be honest I wasn’t feeling much like taking photos. Legs a bit tired this morning. It was only a short 80km day so I was taking it a bit easy.

Which is probably why I missed a sign to cross the river Maine (a Loire tributary on the N side). Next thing I knew I was in a plethora of cycle tracks heading into the centre of Angers. I was supposed to go round it to the S, but here I am being routed into the centre.

Angers is a bit of a dump. Jane and I had difficulty here getting across it in the camper van earlier this year. Lots of long streets going nowhere and precious few shops. Not a baker or tempting looking cafe to be seen.

I had to waste a few precious minutes of tablet charge trying to sort myself out. (the Garmin screen is just too small for that use – its great for navigating in towns if you know where you are).

Eventually I noticed a sign to La Loire a Velo via Trelaze. Not where I thought I’d be going but it sounds Cornish so it’ll do. Another smaller secret sign followed, the another. Seemed to be taking me a bit north but hey ho. Down long streets of tall houses right on the street and bits of old industry. Still no shops or breakfast. Once your eye is tuned to them the signs are easy to find – you get to know where to look. Like Oedipa Maas following the muted posthorn (gold star for anyone who gets that reference) (did you spot the odd GD quotes and references creeping back in in the last couple of days. I think there was even a bit of broooce, and maybe a low anthem), like Oedipa I traversed the underbelly of the city. Old slate mines with mountains of coffin to car sized discarded slate. Birch saplings growing between the sleepers of abandoned narrow guage tramways. Unfathomable pits now filled with water where men once with pick and charge delved 100 meters beneath the surface. 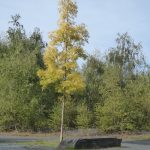 Only this Acer standing  proud sentinel over a slate slab tempted me to stop and get the camera out. I should have done more but I wanted my breakfast.

Eventually I spotted a cafe off the marked trail by a modern road roundabout. They had one pain au chocolate left so I grabbed it with my grand cafe au lait and started to feel better.

Still a fair way to go to get back to the banks of La Loire at La Dagueniere, but at least I’m clear of the city and in fields again. By now its nearly 12:00 and I need to think about getting something for a picnic lunch. Fortunately the next village, La Bohalle, had an excellent baker who made me a fresh sandwich sans jambon and provided the necessary in the line of tarts. 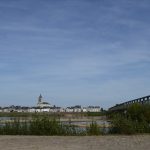 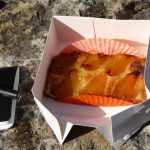 Crossed the river at Loire-Authion and sat in the sunshine on a stone bench and table to enjoy her.

This section of La Loire a Velo which heads from Nantes towards Paris, is joined by La Velo Francette long distance cycle route from Caen/Ouistram to La Rochelle so lots of passing traffic. Long distance tourers with full front and rear panniers (and even occasionally trailers), lycra olelads, day riders, locals on business, even complete families.

Got chatting to an english couple who also stopped to picnic. They’d come down from Caen and heading for La Rochelle and a train back after two weeks. They said the route had been excellent, flat railway paths and riverside tow paths mostly. They were camping : proper job – I’m impressed. Perhaps I’ll try it after C&J’s.

After that the afternoon was fine. Sun out, not much traffic when the path was following a road and a good surface when it wasn’t. 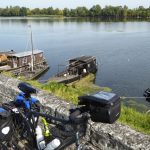 Spotted some more old working boats but clearly meant for cross river use rather than using the river as a transport route. The Rhine is still incredibly busy with traffic (see Saskia’s voyages ) but here no sign that the river has ever been used for commerce. No old wharves or jetties. No rotting hulks. Maybe it is just too shallow and fickle to be of use. 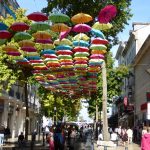 Saumur had a market going on but an unfortunate umbrella stallholder had let his stock escape. A little futher on a riverside village had two (or possibly more) weddings going on and the single track but two directional street was blocked with cars trying to get to and from the church in the middle for a km each way. Much smartly dressed Saturday stress going on. Cyclists squeezed through past open car doors an young men in suits trying to persuade each other to back up. 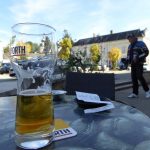 So it turned into not a bad day at all. Got here at 5:45 and was just getting the phone out to call Francois, the host who is absent, to find out where he’d left the key when it rang and I was directed to look in the red shoe. So I sat on the terrace in the warm sunshine with a cold glass in hand and my feet up admiring Francois’s garden with chickens and ducks and veg beds and two large lambs in a small paddock.

Time to relax. When riding thoughts fly by with the breeze and only tiny fragments get captured here. There was something about french railways today and much more. Did I talk about Lovelock yesterday? Ah well, there’s plenty more to be mused on…

93.8 km today (not counting the 4km each way into Avione to get some food this evening. Found a small Carrefour so was able to eat in cheaper than going out. But those km don’t count cos not laden. Rolling speed average 16.8 km/hr. Quite pleased to see both speed and distance a bit down. It was getting competitive between the days.