Rain. Well it had to happen. But it was a short day anyway, and a day off tomorrow so probably the best day for it. Wrap everything up and go out in it. No photos today.

Woke up and it was grey and spitting. Out to get something for breakfast only to discover that the boulangerie a few doors down the street whose sign said “ouvert lundi-samedi, 06:30-13:00” actually had an invisible sign saying “ferme, a vendre”. If only I could read invisible signs then I’d have gone out for a meal last night instead of having just an apple and a banana and relying on breakfast from the baker before setting off.

So checked the route and realised there was nothing until Le Blanc 15km away. Still spitting more heavily, Alain, the host, returned from a school run to Poitiers saying there was a rainstorm there and it was coming this way.

A couple of km out of Touron it was definitely light rain, so on with the cape. I think for touring an old fashioned cycle cape in modern lightweight material is much the best wet weather gear. “Waterproof” clothing, whatever the “breathable” fabric just makes one sweat more and you end up as wet inside as outside. A cape is light and airy and keeps your top half and hands dry. In anything but the coldest weather wearing shorts getting wet legs doesn’t matter cos that is where you are burning energy and getting warmest from the inside.

In depths of winter you might need leg coverings, as I found on the way to Paris when my legs turned blue.  The cape does of course massively increase the windage and slow you down, but if you are riding in the rain when touring it’s because you’ve got to get somewhere and after 15mins you are not going to get any wetter so the advantage of staying comfortable outweighs the 15% reduction in speed.

Anyway part of the route to Le Blanc turned out to be old railway Voie Vert. Mercifully not the clay and grit surface found in Brittany and Normandy, which as Martyn and Jane both know is a nightmare when wet, but compacted larger stones. Plenty of vibration (good to test De Selby’s molecular theory),  and not fast going but not too dirty.

Fortunately Le Blanc had a good Boulangerie open sur lundi and a choice of bars so I sampled two of them not being in a rush and trying to convince the rain to pass on by. Which worked. Tbe reported rainstorm over Poitiers must have headed East and passed before me heading South. When I came out it was only heavy spitting again, and before long the cape had dried enough to come off. 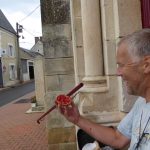 In Belabre I was able to sit on the steps of the church and enjoy getting into this little cherry beauty.

Rolling countryside round here, heading into classic Limousin pasture fields with small woods. The ups were still slowing me down, but the sun was almost breaking through and the end appearing on the map. A bit of a long drag up in the final few km from Lignac but I’m here and the day’s riding is done by 13:30 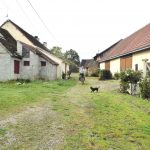 So first destination achieved. Laura here already and Richard arrives tonight. This afternoon rest and get the washing done (clothes and bike) and tomorrow we party. Back on the road on Wednesday. A bientot.