Another comfortable night in a different room. This one done in a modern style in an old stone built terrace cottage by the river L’Antene on the west side of Cognac. 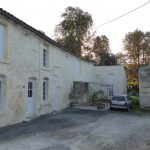 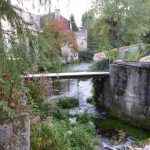 Javrezac where I stayed used to be a village outside Cognac, now almost part of it but still quite pretty.

Set off as usual about 9 heading west out of Cognac. Surrounded by vineyards and the whole area smelling of yeasty fermentation as a future release of brandy starts its long journey from vine to digestif glass.

Very flat countryside. Speed constrained only by the usual variety of road surfaces. 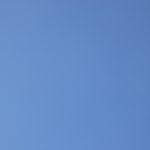 Here’s a picture of the sky about 10am. It didn’t change much.

Stopped for a croissant at a bakers in one small village, Montils, and then for a coffee in another village, Berneuil.  Odd how some villages have bakers but no bar and others vice versa. Most, of course, have neither.

In the bar were two 20 something young men playing pool. While one stepped outside the other took a hasty shot and sent the cue ball bouncing over the side and ricocheting off the wall onto the stone floor and then rolling into my waiting hand. Usually it is a couple of old men in the bar of a morning, and certainly little action. 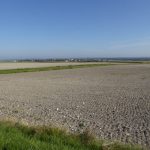 Over the A1o the countryside really opened out. Enormous fields, largely bare. They seem to leave sunflowers until the are totally black, stem and all, before harvesting. Maize stands until it is parched brown with not a trace of green. At home it still has a lot of green leaf when the forage harvester giant comes to gobble it up. 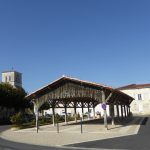 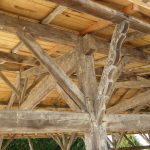 The village of Rioux had this pretty 15th Century market hall in front of its 12th century Romanesque church. 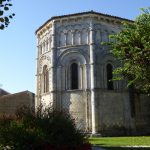 The stonework of the church at the alter end was patterned in a way I’ve not seen before.

A bit further on in Corme-Ecluse was another shady spot to eat an orange in front of another Romanesque church with some amazing carvings around the door and on the west facade. Also 12th century but not as weathered as the ones yesterday. 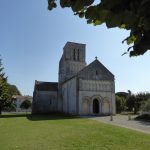 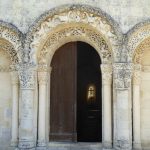 Not a christian symbol to be seen as far as I could tell. Was this the 12th century masons preserving an older culture by embedding it in the new religion’s facade. 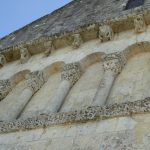 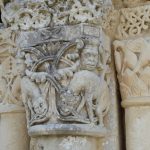 What stories do these faces and creatures tell?

Inside was plain and stained with damp. I wonder if it was once decorated. 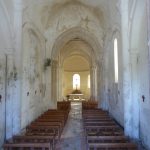 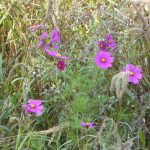 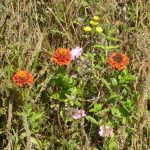 At the edge of a field of maize still standing my eye was caught by these flashes of colour. Garden escapees or wild? 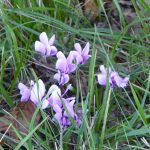 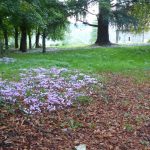 Also can anyone remind me what these are which I’ve seen growing along roadside ditches and in woodland for the last few days. I know them but can’t remember their name. 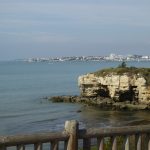 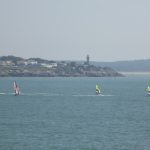 Entering the outskirts of Royan I make my way down to the seafront and head north towards the town and port. The day is still clear and I can see across the Gironde and a ferry approaching. I’m holding pace with it along the promenade with its smooth newly surface red cycle track. 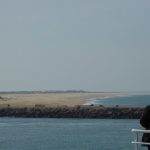 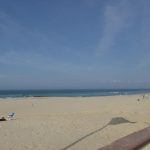 I get to the barrier and purchase a ticket to join the queue of cyclists just as we are allowed to board. 2:15 and 72km done. A call to Chris and John to let them know I’ve got the earlier ferry,  then settle down to enjoy the short 20 minute crossing.

From the port on the other side the cycle track is well marked and well surfaced through the forest away from the road. 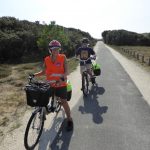 We met, and enjoyed a nearly-there beer in Soulac. And a very good raspberry sorbet too. 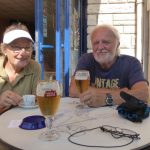 93.1 km of which 6km was on the ferry. 17.4 km/hr which seems oddly slow considering it was over 20km/hr at halfway, but wandering around Soulac probably helped bring it down. Soulac still more or less open but the summer crowds now dispersed and very pleasant in the warm sun.