Woke with an inevitable sense of anti-climax. Even the weather seemed enivatably blue and sunny. Still there’s plenty more to do and see, and I haven’t got to the end of Canal du Midi yet (Sete)

So with that small objective in mind I set off pedalling into the blue again (a Talking Heads reference and one of the many songs that play in my head while going along. Perhaps I should make a playlist)

From Agde to Marselan-Plage is about 5km of separated cycle track along the road, then you hit 12 km of smooth tarmac track behind the low dune at the back of the beach. 50m from the sea glimpsed as access tracks through the dune flash by on your right, with the wind on your port quarter and very few people about you are really into the blue again. Once in a lifetime ride at an easy 30km/hr and feelin’ all right. 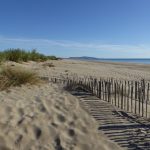 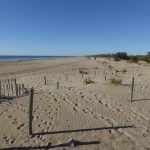 If you want 10km of Mediterranean beach pretty much to yourself then 10am on an early October Sunday is a pretty good time. A weekday might be even better.

Sete is a holiday town, still early enough for not many people around. Truckin’ right on through I hardly even stopped.

Wiggley flat to Frontignan then another section of beachfront and inland round a couple of enormous lagoons then back to the beach for another 10km to Grande-Motte. Getting busier with families walking and on bikes. 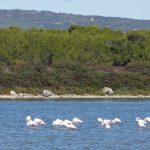 Flamingos on the lagoons (and the odd egret and heron). Flamingos here are mostly white, with pink under the wings when they flap. The ones Jane and I saw at an RSPB reserve last summer were bright pink because of something they fed them I think. Carrots? 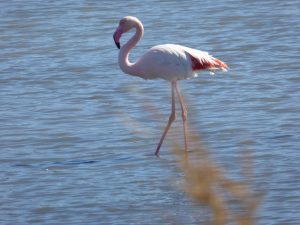 Grande-Motte is a modern resort with loads of interestingly designed blocks one apartment deep and the sea face trapezoidal or elliptical looking rather like those wild bee house things that children make.

Lots of people around now. Miss OSM decided it would be fun to ignore the main roadside separated cycle track round the town and go along the front instead. Whoops. Bad call Miss OSM – not that she’s to know its a sunny sunday afternoon. Speed down to 1km/hr.

We escaped and back on the segregated tracks to Le Gru du Roi where we turn inland heading NE now. At the edge of town a big flea market is in progress, but tempting as it was my legs are starting to ache and the last thing they need is more weight to push along.

Just past that a strange circular building revealed itself to be a bull ring when I got to the other side. I’d forgotten they did that hereabouts. 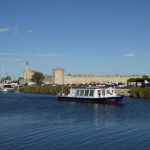 Leaving town along a canal, or possibly river – this whole area seems criss-crossed with them of all sizes – the tower of the fortress at Aigues-Mortes was visible across the fens. When I got there I discovered that the whole town was en-fête with a massive funfair around the walls and dense crowds in the citadel. Found another entrance to the Medieval city and had a bit of a look around. Inside the walls is a grid of narrow streets with 2 or 3 story houses. Massive semi permanent crush barriers for the street bull running they do here.

At the edge of town picked up a splendid new path along the Canal de Rhone a Sete. Mid afternoon and the sea breeze has kicked in so although heading north the wind is still on my tail.

Stopped for a refreshment (cafe and diablo for a heavy caffeine plus sugar kick) at Gallician where we left the canal before tackling the last 10km. Lane was now slightly uphill and the sea breeze was left behind – a cruel north wind rose up. Knees aching I laboured up what should have been a gentle climb through vineyard.

113 km at 16.9 km/hr despite some really speedy sections in the morning. In fact the last 10km knocked a whole 1km/hr off the average. 6hrs 40mins of riding. Not surprising my legs were complaining. Max speed was 34.6 and I know that was on the flat earlier this afternoon. Kept it up for 2 or 3 km too. Perhaps that was why the last bit seemed so tough.