In 2018 Jane, Euan and I did the Big Ride for Palestine from Coventry to London in company with some 200 other riders. Quite a cavalcade.

Unfortunately I missed last year when there were two smaller rides rather than one big one – and none accessible from Cornwall, but Jane went up to join the London one while I dog-sat.

This year was planned to be a mass Bristol-London which we were looking forward to, but because of things being as they are the ride has been re-organised so that everyone does it independently, or in groups of up to six, but we all do the same distance at more or less the same time.

The distance is 36 miles – which is the length of the fence between the Gaza strip and Israel, and also a nice distance for a day’s ride.  Most people are doing it on Saturday 1st August, but we have a grandies first birthday that day which we are not going to miss having been unable to have any contact with him for most of the past four months, so we are going for Thursday (the day after tomorrow as I write).

I’ll write separately about why 36 miles and how the situation in Gaza relates to East Cornwall, but as for the cycling Genie is in good shape having had a quiet year but her rider is probably much less fit. Certainly Jane, who has acquired a proper lightweight road bike and been doing club rides with the Widgers, now routinely pulls away from me uphill.

We’ve been out a couple of times in the last couple of weeks for 20 mile loops around North Cornwall. We have to put the bikes in the van with the dog and park up somewhere, leaving the dog in the van because we can’t leave him alone at home. This restricts us to about a 2hour ride, but I’ve managed ok so should be able to get round the 36miles on Thursday without too much trouble since we plan to stop for lunch at the Pump’n’Pedal near Okehampton.

Euan is coming up from Falmouth to join us, and also John B from Launceston is coming along so we will be four on the road.

And if things go well we will be meeting Ricky and L’Anne at lunch who are doing the distance from Torrington to Okehampton and back.

Donald Trump, having dealt with the blacks and the hispanics and refused to concede the election turns his attention to the next group to get the blame for all the troubles of his time – the Irish Diaspora in the USofA.

After much trouble and persecution the Irish-Yanks demand a catholic homeland – Ireland won’t have them  because they are now seen as Americans not Irish and Ireland has ditched its religious ties. END_OF_DOCUMENT_TOKEN_TO_BE_REPLACED 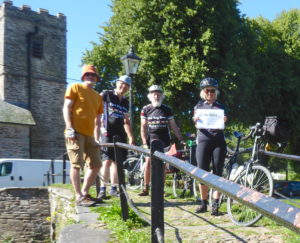 We assembled at Launceston Riverside at 10am, representing where the border fence/wall around Gaza meets the sea near As-Siafa.

A lovely sunny day with ne’r a cloud in the sky and minimal wind.

Slight problem only 2.8km from the start were we had a puncture. Fortunately a front wheel, not the back which makes it a bit easier, but Jane’s bike has the toughest tyre to get off that I’ve ever encountered – it took two of us to break it free from the rim.

The rusty drawing pin culprit was unceremoniously dispatched and we were back on the road to tackle the first hill up to Lifton Down with only a 15 minute delay. 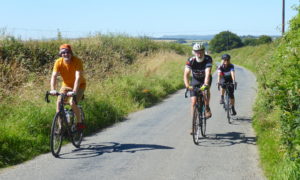 Once up on the higher ground above the Tamar valley it was glorious riding. Extensive views, gently rising lanes, no traffic. 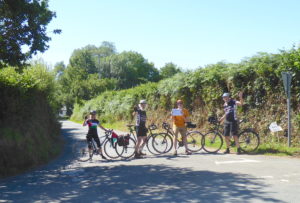 Cross Green, at about 6.5km from the start represented the first border control point – Erez/Beit Hanoun. 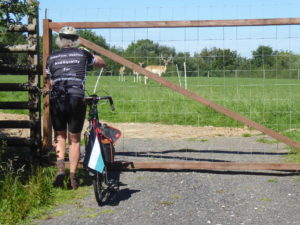 but who knows what they were thinking about the humans curtailing their freedom.

A longer section of 20km along the lanes towards Halwill Junction (which features a road of houses built in the early 70’s called “Beeching Close” – the clue is in the names) where the turning onto the A3079 represented the crossing point to the East of Gaza City, 20km from the start, called Nahal Oz. 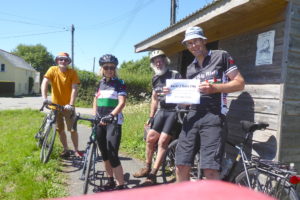 23 km (ish) from the start this is equivalent to the second Gaza city crossing point. After which there is a long section to Kisufim/Al Ma’ani which would be our lunch stop.

Unfortunately first we had to lose 100m vertically of the 200m we had slowly gained during the morning, to cross a river valley and then recover it all and a load more on a bit of a brutal long (never ending it seemed) climb up to cross the A30 dual carriageway.

It was very hot by now – although not hot like the middle east is hot – we had a relatively mild 30degC. Enough to start melting the tar on the road though as we neared the top, somewhat later than planned.

As we got to the top my phone rand and it was Ricky enquiring where we were – somewhat sheepishly I confess we were still a mile away, it being now 45 mins past our agreed meeting time, have you been waiting for us? “We’ve still got three miles to go, man it is hilly!” came the reply. 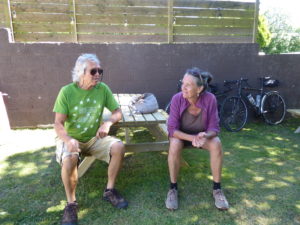 So we did get to the Pump’n’Pedal before them, but they arrived before our food, so all was well.

Air-hugs were exchanged (what strange times we do live in) and beers and pasties and elderflower drinks and pizzas were downed and we all started to feel a bit better.

Ricky and l’Anne had come 20miles (32km) up down up up down up up up on the Devon Coast to Coast, so were going to do well over the 36miles by the end of the day. 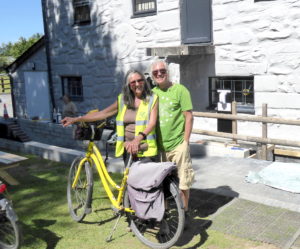 Our way back was somewhat easier than theirs, being mostly on the old A30 with loads of sweeping long descents and some rises to reveal stunning views over the West Devon North Cornwall (or Greater Cornwall as we call it) countryside.

Nearly 60km/hr on those downhills without pedalling.

One final crossing point on the East side of Gaza is about 52km along the fence from the sea – which in our terms meant Tinhay where we cross the Wolf river. 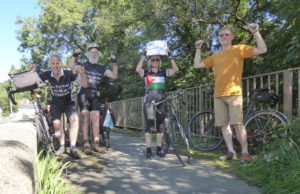 Then a final 8km and down into the Tamar valley for the final run home.

Back where we started, but now representing the corner between Israel, Egypt and Palestine where there is a crossing point into Israel at Kerem Shalom.

61.7km on the road (a shade over the 36 miles) at a slow rolling average of 15km/hr (it had been down below 14km/hr at lunchtime so we had made up some ground on the way back). 854m of climbing is quite enough for a short day. 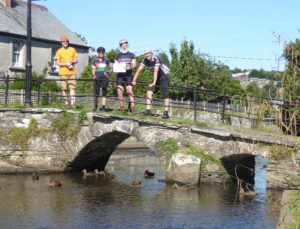 and that is how small Gaza is. Only 6 crossing points according to our map – but the situation is fluid and they seem to be closed and re-opened at the whim of the Israeli government.

A large chunk of the population still having to live in refugee camps nearly 70 years on. Ostensibly part of the nation state of Israel, but very much as second class citizens. Apartheid still stalks the world

As noted above, the area we encircled on our ride is a bit less than a third of the area of the strip – so proportionately if you built a high security barrier around it and forced the entire population of Cornwall to live within it you would start to approach the situation the Palestinians find themselves in. 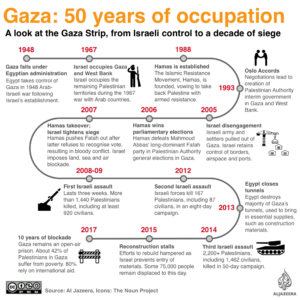 It puts Cornish Nationalism into perspective – An Gof indeed!