Wow what a fabulous day. I overslept a bit but managed to get off shortly after 9. In summary sunny flat quiet roads and cycle paths lovely scenery. Not too hot, just perfect weather and terrain. Nothing not to like.

Perhaps I should leave it at that. Here are some photos randomly along the way. 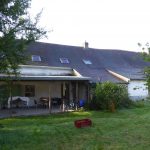 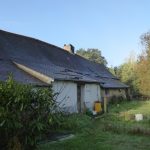 David & Pascal’s place where I was last night. 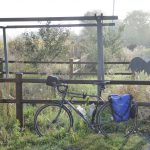 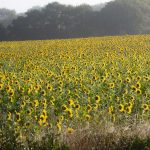 A late crop of turn-to-the-suns making the most of it. 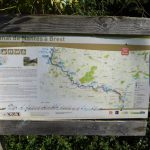 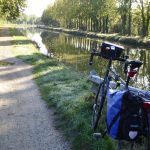 The Brest-Nantes canal towpath. Beautifully peaceful, occasional mushroom foragers and fisher folk, and once a train of half a dozen lyra clad old young men going the other way. There should be a word for these 45 to 60 year olds. Olelads perhaps. And for me, perhaps now a young old man at 65. A yoldi?

The slightly bumpy path getting to my bum and making me muse on De Selby’s Molecular Theory. (read The 3rd Policeman if you don’t know it) Just don’t be surprised if when I get back I have developed a habit of hanging around in the hallway with me elbows on the wall. 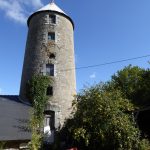 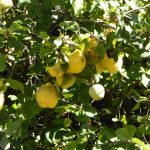 This old windmill, but look at what’s on the tree growing in front of it. Quinces ☺️???

If the four quinces at Gwel Dulas do as well as that you’ll all be getting quince jelly and cheese for Christmas forever! 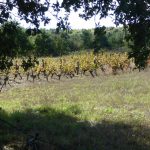 First sight of a vineyard, then a few km further on more vines interleaved with commercial scale apple growing. Loads of boxes stacked ready for harvest.

Jersey off by 11:00. I was tempted to take my t-shirt off too a little later. Do you remember that chap a few years back who was walking the Pennie Way wearing only his hiking boots and got hounded by the police. I reckon he had a point, why bother with clothes if they are not needed for warmth or comfort.

Come to that why do we spend half our lives in buildings when there’s all this out there. Like the Do-dah man says: Gotta light up and look all around.

Lunch by La Loire. With a french tart sitting on my knee. Dejuener sur l’herbe anyone?

This sort of cycling really gets the endorphin highs flowing. In bliss for much of the day. 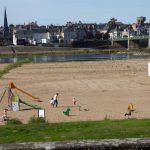 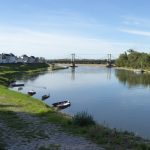 In summer the Loire has beaches as well as bridges. Bollocks to the Chattocks, who needs ’em. 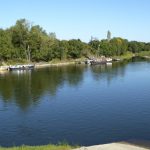 NickP notice what’s on that small barge ahead of the orange motorboat. There’s your answer. Jury rig a pair of leeboards. A sheet of 8×4 marine ply cut in half diagonally. Fix some pivots on the side decks for the pointy corners and a line to haul them up in shallow waters and you’ll be fit to cross the channel ? 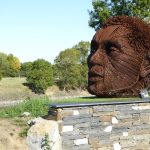 Not sure what this chap was watching for downriver so intently. The sculptor Gerald Therioult died in 2001 so he can’t tell us. Lots of sculpture dotted around Montjean-sur-Loire. Public art is a public good. I like it, even the more ghastly Bedminster murals can be tolerated. The sculptures here were less in-your-face and that works well for me.

Sections of the Loire cyclepath are on little used roadway along the top of the 8m high embankment that presumably stops the surrounding floodplain beyond it from flooding. There’s still a fair area of field between the embankment and river. I wonder how often that floods.

Reminded me how much that natural that I’ve been enjoying travelling through is actually human interaction with Gaia. The first hominoids to come to the Loire presumably found an area of swampy woodland surrounding the river channels. It is 10s of thousands of years of the work of man in nature that has given us what we see as natural today. It was people that built that embankment not the river.

In places the river itself divides into two or three channels with islands between. One channel seems to be bouyed, implying the river is navigable although I saw no traffic or evidence of traffic apart from pre-bridge barge crossings. Most of the bridges are surprisingly recent, late 19th or 20th century.

Some of the islands are quite substantial with farms and hamlets on them. On one such island that the path went along for a few km, in the middle of nowhere I stumbled on this. 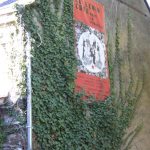 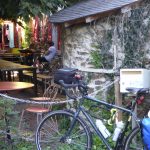 The Lenin Cafe, Musee and Bistro. A singer with guitar was playing in the sun dappled shade. Athough still 20km from the end I had to stop for the best nearly-there beer yet. 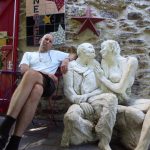 Vladimir and Krupskaya were all over each other, but the singer was good. Classic french troubadour. 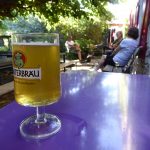 Fabulous day. The last km flew by on wheels that seemed to be barely brushing the early evening sunshine painted road.

‘Only’ 114 km today at ‘only’ 18.1 km/hr rolling average. 9 hrs in total. Max speed 43 km/hr – goodness knows where that was,  as the steepest hill was 4m in 40m up and down to road junctions on the canal, and the longest hill was 100m gentle ramp for the bridge over an autoroute.

Of course it is uphill going up river but I don’t think a 9m rise over 40km can be counted as a hill.

8 thoughts on “Day 5 – Blain to Bouchemaine”