The sun has got his hat on, hip hip hip horray,

The sun has got his hat on and he’s coming out to play. 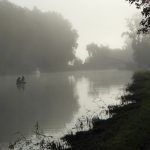 I won’t go on as I think the next couple of lines are no longer acceptable in polite company.

Suffice to say as I set off mist was rising from the canal and the sun was starting to burn through the promise of a fine autumn day. 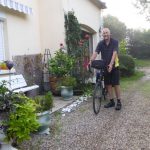 First over breakfast (compris), the host Anne gave me a complete rundown of her family history in the house complete with photos and her grandfather’s WW1 record card (he survived). Actually it was all quite interesting and good practice at understanding french.

As today’s route was entirely along the canal de Garonne I gave Miss OSM the day off until it came to finding the address at the end and sometimes answering my plaintive are we nearly there yet. 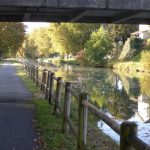 The canal path is not quite as smooth as yesterday’s railway tarmac, but pretty good and pretty flat. Locks every 4km or so and the path swapped sides fairly frequently.

Its a lot less boring than the forest and railway paths cos there’s more to see. During the morning not much traffic either on canal or towpath. Met a Belgium cycle tourer who had been robbed of passport and money in Toulouse and had to go to Bordeaux to have the consulate there sort out his papers before continuing to Spain. He seemed genuine and I gave him what change I had to be able to eat on the way to Bordeaux. 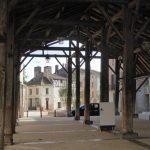 Had a morning cafe au lait (actually grande creme its called now I’m getting south. Also pain au chocolat has become chocolatine) in a boulangerie in a small village. It boasted an ancien marche au ble which was quite nice. So was the coffee and pasteries so I got a sandwich and tart as an insurance against not finding anywhere to lunch.

12:30 found me at the port at Buzet where there was a bar/restaurant ferme mardi et mercredi. But a woman popped her head out of a 10m motor boat with a red ensign. She and her husband had been living aboard there all summer playing music at the bar every Thursday to pay their rent. Been doing this for a few years and were about to move on to their winter quarters further along the canal now that the season was over. 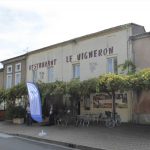 She told me of a fabulous restaurant in the village where a four course lunch was €15 so I had to try it. And it was fabulous. A very good vegetable soup, followed by a choice of starters – I had the buffet of hors d’heurve, which turned out to be a fill your large plate with as much as you like of a delicious and wide range of salades, pates, sausicsson, etc etc. To follow I chose coq au Buzet since we were in Buzet and its a wine I like. (incidentally the vineyard area I emerged into near Langon yesterday was Sauternes according to Anne and she should know because her family used to grow vines and tobacco and her son is a top class published chef – she showed me proudly one of his books) (I’d forgotten the french grow tobacco, reminded me of the smell of those Gauloise when one was trying to be cool at 17)

After all that it was the dessert trolley with a stunning array of tempting tarts an flagrant flans. But I was stuffed and anyway had a french tart secreted in my bag so I went for the fresh fruit salad. All washed down with a quart (no that doest NOT mean 2 pints here) of good rouge. Fantastic food and value. 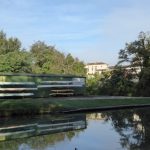 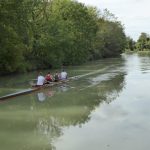 More traffic on canal and towpath after lunch. Legs not too wobbly and ballast not slowing me down too much and sun not too hot. Everything just right.

Lots of fishing, canoeing and sculling activity at Agen. Then I caught up with a really pretty barge sporting a Cornish flag. 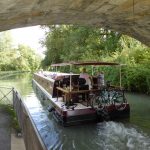 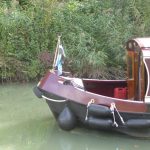 In the ensuing conversation established that they came from near St. Austell but now lived aboard this barge which they had had built for them 4 years ago. Based on a traditional english narrow boat but with 12 foot beam and 60 foot long. By far the nicest thing I saw on the cut all day. On their way to Toulouse to dry dock for bottom painting.

At Valence got chatting to a Scottish couple who had flown to Bordeaux and hired bikes for a two week tour and loving it. They had been to the same restaurant in Buzet last evening so we compared notes and agreed it was top class good french food. Full of french people both in evening and lunch which also signifies.

Finally in to Moissac at 18:15 just in time to have a really nearly there beer in the sun only 25m from my digs’ front door. 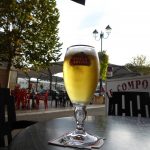 This house is extraordinary and my walk around this evening showed it to be a lovely pretty french town. It now definitely feels like I’m getting into the Sud. The river Tarn flowing down from the centre joins the Garonne coming from the Pyrenees here. Must take some photos of the town before leaving tomorrow.