Woken frequently in the night by the wind in the willow outside my window thinking it sounds like rain. But daylight revealed a grey sky with a misty horizon. Loins were duly girded.

Baziège had proved one of those large villages that had lost many services; two bakers remained but the bar was ferme, and the rather nice looking organic bistro was only open Wednesdays and Fridays. Grrrr.

Anyway it was a short day planned and the Wind from the West (not a Godard film) was largely on my tail and carried a load of mizzle it was attempting to catch me with.

The first 18km were along the canal – home to hundreds of ducks (Mallard mostly) and nothing else. The roar of the cars on the nearby autoroute was soon drowned by the rush of the wind in the trees. The leaves swirling away to mulch the winter fields.

Stopped for a coffee (and a very poor pain au choc) and the mizzle nearly caught up.

After 18km we arrived at an oval basin double lock called L’Ocean and a sign on the path announcing leaving Haute-Garonne. The path promptly turned to a rough but acceptable track for half a km until it met a road then looked like it was getting rougher. I obeyed Miss OSM and took to the roads. She did a first class job of finding a very good minor road route for the rest of the way. 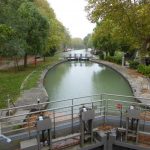 After a couple of km we crossed the canal again at another double oval lock called La Méditerranée and it was facing the other way! Over the top and downhill all the way to the sea.

The Canal du Midi from Sete to Toulouse was built first in 1680s under Louis 14th. Hence the older style of lock. Unfortunately he spent all the treasury on Versailles and similar vanity projects so at Toulouse cargoes had to transhipped to river barges for a much slower and less reliable journey down to Bordeaux. The river levels being prone to wide fluctuations. Not until after the revolution was the project completed with the Canal de Garonne replacing the river transport. 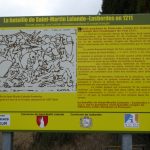 Our summer pyrenean lodging had been just across a valley from Monsegur (a 4 hr walk) which was the scene of one of the last stands of the Carthegians against the Crusade. They were besieged on the mountain top and subsequently massacred after being promised clemency. So I was interested to read this beside a ploughed field in the middle of nowhere.

With the wind behind and the clouds lifting I could see big hills with their tops still enshrouded away to the SW. Not quite the pyrenees I think, but must be close. Montsegur is down there in the high foothills. More large hills in the distance to the NE and flatness between. That’s my destination.

Fields almost all ploughed now. Gradually blue sky emerged between the clouds and a large town on a slight rise in the distance.

Vineyard country again. I’m puzzled by the way vines grow. These ones seemed mature plants but didn’t seem to have been harvested and under the leaves were clusters of shrivelled and undeveloped grapes (I was looking for some to try). What’s that about?

Approaching Carcassonne a sign announced “The Airport of the South of France” and a Ryanair tailfin was visible poking over some low sheds.

Entered Carcassonne through the usual jumble of new and old transition zones along back lanes beside rusty weed grown railway lines and scrap metal processors mixed with retail sheds.

Eventually found myself alongside the canal again, now in quite a deep cutting since the town is on rising ground above the Aude. Wended my way into the rather nice central area and sat in the sunshine under trees in the square quaffing a beer or maybe two. I forgot to take a picture though. 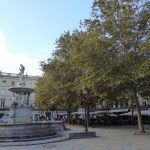 Whilst sitting there a Ryanair jet passed directly over at about 300ft. I was so surprised that I asked the waiter if it was normal. It is, and probably brings most of his trade judging by the accents around. Ca va? 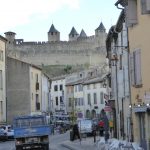 I was in very good time though so I wandered across the river on the old bridge following the little tourist road train – plenty of seats free in the mid afternoon on a sunny October friday. Up to the medieval citadel perched on a hill on the other bank. Had a good wander round pushing the bike along cobbled streets.

I imagine in summer it is a tourist hell hole, but not at all bad today and very charming. Massive stone walls and bastions surround it and twisty narrow streets ramble around inside lined with the modern equivalent of armourers, fletchers, leatherworkers, tinkers, provisioners, clothiers, religious relic and favour providers and all the other essentials of life. 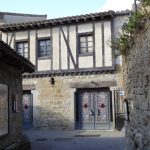 Things you wear once on holiday and take home to the back of the wardrobe and knick-knacks for the hall windowsill to remind you of the great weekend crusade of ’17. So long as it’ ll fit in cabin baggage. 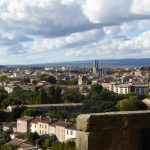 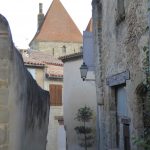 I was tempted but my panniers are not big enough and the captain is complaining my ride is overloaded for the hills to come. 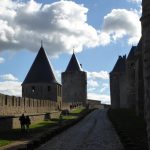 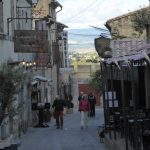 So I left as I came, and that’s as it should be – tread lightly on the world. 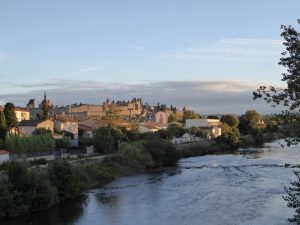 89.7 km today including all the wandering around in the late afternoon. 18.0 km/hr excluding the wandering around. Just under 5hr to get here. Top speed 55.8km/hr and I know where that was: on a very quiet back road that I could see was empty far ahead I came to a drop and decided to let it go. Near the bottom I realised a) the curve over the little bridge was a bit tighter than it seemed from the top, and b) that the loose fine chippings had all also migrated downhill banking up at sides and centre of the road making a surface I really didn’t want to have to corner on. But by this time it was too late to stop so I crossed the loose stuff and some grass verge before recovering enough to avoid the ditch leading into the stream and regained the road somehow staying aboard and still moving more than fast enough…