Time for the final push. Looking at the route options this looked quite different from the flatlands of the west or the rolling countryside of the north. Worse than the Eden Wiggle event that defeated me a few years ago with Sian. (she was far from defeated but kindly stuck with her DaD).

So I had worked out various options to bale out and get a train and then discovered that France was en greve (on strike). Just have to get on with it then. 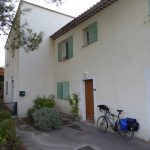 Got on the road a bit earlier by 08:30 to make best use of the cooler part of the day as it promised another scorcher. The AirBnB had been in a small terraced house on a private gated resort around a golf course and swanky hotel/country club. Nothing swanky  about the host renting out her 12yo son’s room for the night. Interesting.

First challenge is to get over the relatively minor line of hills between Mallemort and Lambesc. Only up to 250m but ouch there were some nasty short climbs on the back lanes. Nothing impossible but bottom gear and standing up praying for the next corner to level out to get my breath back. Controlling your breathing to make maximum use of the oxygen hit on each inspiration is key. Naturally the up to 250m includes some downs to fool you into thinking this has been done. 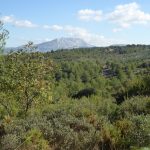 So that’s the first 15km of 100+ done, time for a coffee and croissant and pain au chocolate. Lambesc duly provided.

Hope that line of barren rockfaces appearing in front are not what we are heading for. Dead ahead.

Now comes the first proper test of the day, a climb to 300m.  With minor descents and then down again to Aix-en-Provence all on back roads. Up at the top it was gorgeous for a while, proper scenery, but the the descent was a bit technical on a bumpy twisty lane. The tension of the hard climb and technical descent is getting to the top of my back and shoulders.

Coming out of Aix I’m passed by two lycra lads on superlightweight frame road bikes at the foot of the first climb. I don’t see them again!

Initially another back lane up some vicious climbs back to 300m+ then another twisty descent. Aix was a bale-out point but I’ve put a hump between it and me so onwards I must. Up again to 350m thence slight down into Greasque for a pit stop, and to refill the water bottle.

It is basically descent now down to Auriol but not without a couple of steep little kickers back upwards. Actually it’s quite nice to be in scenery again and not just a horizon with green below and blue above. There’s some daunting looking little lumps of rock on the horizon though.

Funny thing is that over the last few days I have occasionally felt “this seems a little like hard work” or “this seems a bit slow” and glanced down at the dashboard  to discover  I’m actually still rolling at 24km/hr plus. So I guess maybe I have got a bit fitter over the last couple of weeks. Doesn’t feel like it on the ups, though as soon as it levels off a bit I loose the desire to stop for a rest and recover quite quickly from my gasping for air enfeeblement.

Aix-en-Provence is a bit of a big city so I don’t fancy stopping,  so on it is to the next section. Up over the top again to Auriol. Legs tired whenever I set off but ok once going. Climbing more seriously and getting hungry.

Greasque provides a coffee and a refill of the water bottle. Press on but really need to take some food on. Eventually find a bench on a busy street in some small town, La Destrusse, to eat my sandwich before tackling the next ascent. Sun hot now, very grateful for trees shading the early part, then always looking for the next patch of shade simply for some cooler air, not to stop – I dare not.

On the narrow descent towards Aubagne several times I miss a turn that Miss OSM correctly wanted me to take and I have to retrace slightly. Problem is that the tablet now has to live inside the bar bag since the super strong velcro proved to be only super strong on the velcro side, the sticky back side having unstuck itself from the top of the bag. On the bumpy back lanes descending you really want to keep the bag firmly shut or stuff bounces out. Hence it is easy to miss a minor fork in the road.

Aubagne was the last opportunity to get to the train before the big one. Time was ok and I felt ok so took Sian’s Hemp & Chai based energy bar and went for it.

The only route that the normally main-road adverse Miss OSM could find involved taking the D/RN8 over the mini-mountain. It was busy but the good news is that there is a hard shoulder cycle path almost continuously. Even better the gradient was steady but not excessive, probably averaging only 8% for about 10km. So a steady grind. About a third of the way up there was a coffee stop and the way went down almost to the starting point. Grrr. Ah well up we go.

An odd thing I noticed today was how on the downhill sections they seemed to be much steeper than the ups and I was thinking “gosh, I’m glad I didn’t have to come up this side”, but when I look at it on the profile it is pretty much the same.

Perhaps something Thaler might have had some insight into. Having invested on the upside, the downside seems that much more valuable?

Eventually the summit at +409m is reached and the reason why there have been so many motorcycles on the road becomes clear. Not only the gorgeous sinuous curves that bikers love, but at the top the Circuit de Paul Ricard motorsport venue. Apparently the French Grand Prix is to be contested here next year. 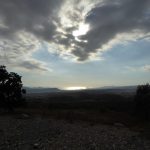 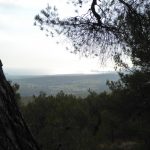 Also a great view down to the sea. The last 10km down to Le Beausset were a joy – smooth roads, power descent, sweeping curves. 45 km/hr rolling down the mountain going fast, fast, fast. Roger  keep your brakes on for this corner if you please.

Somewhere on a desert highway…

And so we reached the end. Mercifully the climb to Nick & Diana’s place outside Le Beausset proved not as onerous as it could have been. No 920 doesn’t mean there are 459 other houses before theirs on the street, it means they are 920 metres from the bottom of the lane.

And there I am greeted by a refreshing ros(e acute)

I’ve blooming well made it.

Today 108 km at an average speed of 15.4 km/hr. That’s hill country for you. Max 45.4 km/hr – that lovely long sweeping last descent. 7hrs give or take a few mins and 21 days in the saddle. Time to wash off some of that dusty dirt.