One of the (many) great things about cycle touring is the way you can penetrate and withdraw from towns and cities by secret hidden ways and roads less well travelled.

You explore the frontier zone where the rural and the urban face off against each other. Pushing back and forth, fighting over scraps of land as plants grow in the corners of used car lots, and new roads cut across wasteland fields. Earth is scraped and piled high as land is cleared and then the seeds that were hidden all burst into bloom and decay. The people in these zones are strange figures too. Modern day frontier folk from both rural and the urban circling each other warily. Fields of maize grow hard up against new supersheds, and the scraggy horses inhabit overgrazed pasture behind corrugated hedgerows. Elsewhere suburban tendrils throw mazes of twisty little path-roads between commerce and country. Stuff you never normal see laid out in this frontier land.

Suffice to say Miss OSM took me in to Vannes and out again through such territories.

Whilst there at Vincent’s modern flat in Rue du les 4 freres Creac’h (which I think is the Breton version of Creagh, but I failed to find out more or who the four brothers were) I went out to wander the city streets after dark in the warm night air. Plenty of good eating houses even with many closed for the end of the season. Down by the port I remembered the incident of the French Tickler with the crew of Penlena ’04. Good times. 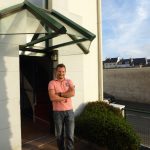 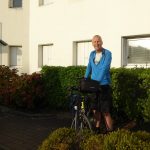 Waved farewell to Vincent and was on the road soon after nine. Sunshine soon faded as high cloud took over.

Made good progress to Surzur at 20km in slightly over an hour despite stopping to wonder at this imprisoned lady in white above a cave. 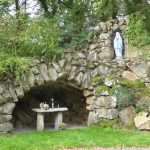 The cave might be old but it’s concrete and rebar holding that stone arch in place.

Enjoying a cafe au lait and croissants I was entertained by a couple of old women french gite owners and the landlady moaning about the outrages of their english holiday guests over the summer. Coming over here with their funny cooking and complaining that they can’t get Radio 4!

When a motorway gets built sometimes the old main road it replaces is left alongside separated behind a hedge and bereft of all traffic bar the very occasional car and free for cyclists to use.

Such is the way from Suzur to Muzillac. Centuries of improvement have smoothed out the corners and eased the gradients and now tens of years of benign neglect have not yet charged much of a toll so the surface was still good and the way was superfast. 32km down and averaging well over 17km/hr

Rising out of Muzillac caught a glimpse of the sea not far away to the South,  but I was intent on pressing on. Toward the bright horizon in the East I set my way.

Lanes and more open farmland. Maize coming in leaving the black dirt open and beckoning to the rain. The pace picked up. 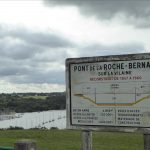 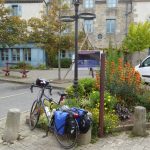 La Roche St Bernard is a pretty village with a suspension bridge over a yacht harbour. Stopped for a lemonade in the warmth outside a bar. The jersey had come off an hour ago. 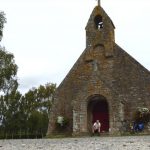 A few km further on found a chapel porch to sit and eat my lunch. Sausicon sec et salade in bagette de compaigne. 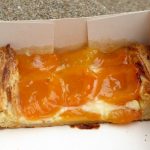 Very few apple orchards today as we leave Brittany and enter Loire-Atlantique where they were making late hay. 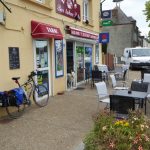 Stopping for the late afternoon espresso I sit facing West, where I have come from and see heavy dark clouds massing. A warm wind from the west probably helps explain the excellent pace today. Plus it hasn’t been too hilly. All the time I have had a bright horizon in front and expecting the blue to break through not noticing what was happening behind.

SE wind on Tuesday, S yesterday, SW and now W today. Cloud to the S, then W then W & N. Sounds like there’s a storm somewhere beyond Finistere. Hope it misses you back home.

Must press on as the wind smells of damp. Have to find a shop to buy food for tonight but haven’t passed through even a village for ages. Start making detours to possible places with food shops but all are closed. Final shot when within 8km of the end is to detor again into Blain where I am relieved to find a Lidl (never expected to be saying that) and little else. By the time I come out it has started spitting. 45mins to kill before my host gets back from work and only 20min ride left so dive into a grotty empty bar for the nearly-arrived beer. 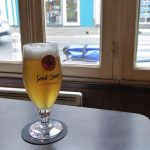 When I emerge it is slightly more than spitting but not wet enough to want to put waterproofs on, so head off at speed so that body warmth evaporates the rain as fast as it falls. 20 mins later I’m there and not really wet.

117km today at a rolling speed of 18.7 km/hr. This daily improvement surely can not continue. Nine hours on the road, six and a bit in the saddle.

Now its proper raining, but I’m inside fed comfortable and had a most enjoyable long chat with David the Welsh (lived in france since ’79 though) host.  Time for bed.