Interesting undulating countryside moving from the land of brick to the land of honey coloured stone and thatch as heading into the Cotswold edges. 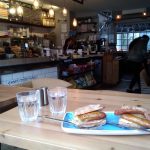 Before setting off had an excellent breakfast baguette in a slightly organic independent coffee shop 50 paces from the White Hart.

A lot of today was on quiet country lanes and really nice riding. Ms Osm kept me away from main roads heading out of Buckingham to the North towards Stowe (public school and NT House).

Just outside town came across a couple of men with a gypsy van and horse and tent on the verge busy building a new van. The new van was a commission for an Australian gent who was going to have it shipped out to use in the outback. Much concern by the builders about the effect of a a super-hot dry climate on the wood and glues they were using – but the client is always right ?. 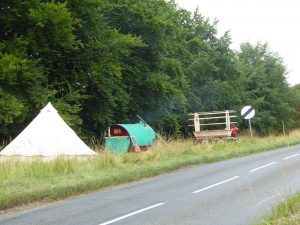 One of them was living in the older immaculate looking van with horse, the other had recently passed it on to him. These were not Romany folk, but English modern travellers.

A little further on a fox trotted across the lane in front of me. The fields, mostly arable – barley nearly ready to harvest – all had good headlands left to allow horseback riders to use them.

By the afternoon it was more mixed arable, some dairy and beef cattle and sheep and even more evidence of horsey-culture with custom new looking horse boxes parked against immaculate honey stone houses and outbuildings. Here in Oxfordshire and North Wiltshire wealth was tastefully displayed – I don’t think I was passed by a car more than 5 years old and even those immaculately polished. In the villages there was no sign that anyone struggling to get by was ever seen.

Here also the corn was already being harvested.

But before all that came morning coffee at a vegan cafe in Bicester and then grappling to find a route down towards Oxford that wasn’t hard alongside the totally busy A34.

Ms Osm wanted to send me along the pavement which was well separate from the road by a wide verge but narrow and nearly overgrown, and very noisy from the traffic. In fact there is a perfectly good lane running parallel a little further from the main road so I baled out onto that.

Over the M40 and then over the A34 to get around well to the North of Oxford. Here Ms Osm went a bit bananas and decided that a footpath that crossed the canal and Cherwell from Hampton Gary was the best way to go.

In many ways she was right as all the road crossing points were a long detour and main roads and it was a beautiful bit of meadow countryside. The first two narrow kising-gates had unlocked farm gates beside and the path was smooth grass. Lots of walkers around.  However then the problems began as at each stile or gate I had to unload the bags and lift the bike over my head getting caught in branches to get it over.

Made it safely though without mishap. Getting warmer so time to take the jacket off.

After passing Blenheim found a nice pub in one of those immaculate villages and enjoyed a pint of bitter shandy (lemonade) as an experiment to counter the usual post-lunch wobbly legs effect. It worked from that point of view and was refreshing, but it did make the beer taste funny ?

Onwards round to the North of Witney through some lovely classic English countryside on very quiet lanes – almost a rural France level of traffic, although every time a B or A road was crossed there they were whizzing by.

About 20km short of destination the tablet battery died after nearly 7hrs so goodbye to Ms Osm and navigation got a bit more challenging.

Now seemed to be in Wiltshire and the final challenge was to find a way to cross the busy dual carriageway to get into Cricklade. WiltsCC provide no cycle signage that I have seen. Eventually found that by going the wrong way on a slip road overbridge on the pavement an overgrown tarmaced footpath dived down through a wood and onto the another slip road still going the wrong way but wide enough until it got to the first house.

Here a heavily laden apple tree overhanging the road invited me to pluck one as I flew by. First English apple of the year, warm and red in the sunshine and very nearly perfectly ripe. Lovely

The hotel turned out to be a good mile out of town on the other side up what seemed like a very steep hill.

Excellent room though, much better than last night.